"Echo goes on a Native American vision quest to pick up the pieces of her life. Her whole life was defined by her misconception of the Kingpin as a hero and Daredevil as a villain. Can she get her world back in order? Part 3 of a 5-issue arc by guest-creator David Mack. Guest-starring Wolverine." 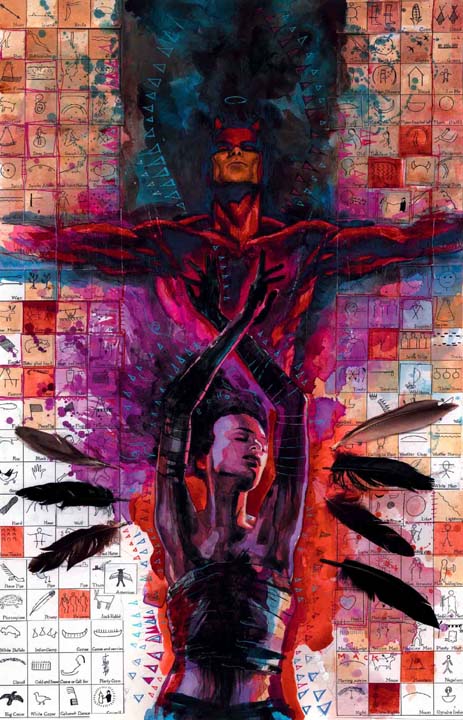 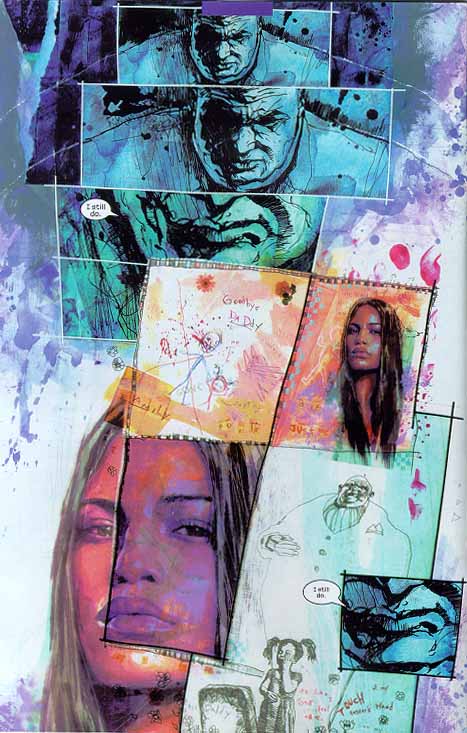 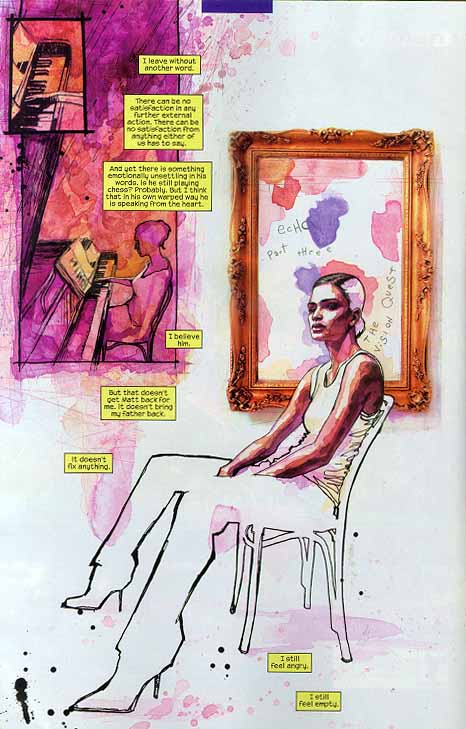 Echo goes on a vision quest - which leads to an interesting encounter.


Review: David Mack's guest stint continues, and there’s no denying how gorgeous a comic this continues to be. When he paints faces, they have such depth they seem photo-realistic, as if he slipped someone’s picture into the scene. The multimedia collages remaining rich in detail and design - complex combinations of textures, colors, and styles; he has turned each issue of his current run into a feast for the eyes. These are lovely books, and repeated reading brings small things you might overlook back into focus.

The story. The story is good, well written. Mack shows off his history and knowledge of Native American lore and tradition; you can’t say he doesn‘t know his subject. But this is mostly an issue dedicated to Echo’s internal search for her outward problems. Her meeting with father figure/betrayer Kingpin is brief and emotionally unsatisfying for both parties, but kudos to Mack for such a grotesque Kingpin - it’s not only a wonderful take on the character, but he visually fits Echo’s current feelings for him very well. Then we’re done with that, and Echo decides that she needs to go inside herself to figure out her screwed up life. That’s it.

Again, just like last issue, I wished a bit more happened. It’s nice to have this kind of in depth character study, especially in a mainstream comic … but I’d be lying if I didn’t admit my attention started to flag at certain points. When the story does start to pick up some momentum, it ends - just like last issue. Mack is a big tease, making us wait for the pay off, and while that’s necessary, it’s also a little frustrating. Matt makes a single cameo in the issue, but it’s just a flashback to that wonderful painted panel in last issue.

It could be just me, but I want more. Mack Mack is a great writer and artist, and he knows the complicated Echo inside and out, but by now I was hoping things could have been racing along towards the end. He’s set a more contemplative pace, which is good too, but …

I keep using that word, “but”. This is arc is good so far, but it could have been great, like the art, if only there wasn’t something missing here. I’m not sure what’s missing, though, so I can’t say what is to blame, if anything. It could be me.

But if you’re a fan of David Mack's work - and/or a fan of Echo - you definitely need to pick up this issue. And while it’s nice to have this kind of layered character study in an arc, it would be great if there was a bit more momentum.

DAREDEVIL #53
by David Mack (Marvel Comics/Marvel Knights)
If one were to pick up this issue cold without having followed the title recently (or even at all), the reader would be blown away by the unique approaching to comic storytelling here and the cultural elements that are an integral part of the main character of this story arc, Echo. For those of us who have been following the book closely, this was another somewhat frustrating issue. Mack advances the story a little here, but not much. The character's introspection really isn't leading anywhere, it seems. Still, the spiritual tone at play here is a soothing one, and the character remains a unique and interesting figure in the world of Daredevil. Furthermore, the multimedia artwork is something that I doubt will ever get old, at least in the context of conventional comic artwork in mainstream super-hero comics.
7/10