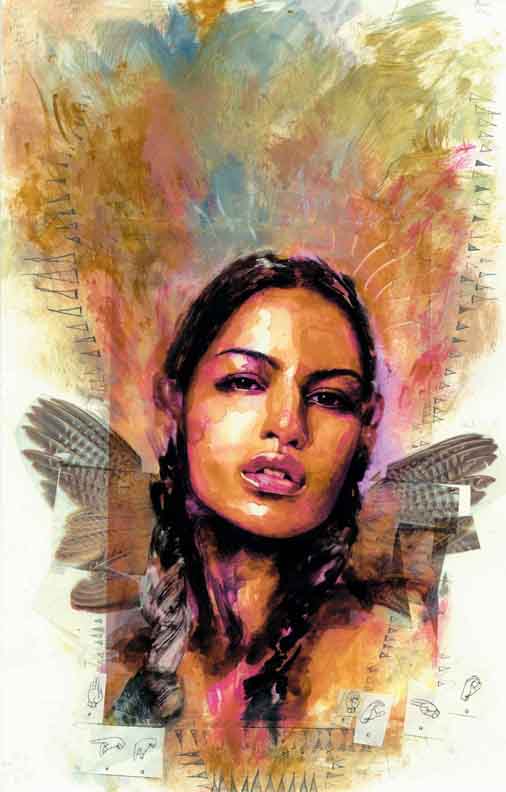 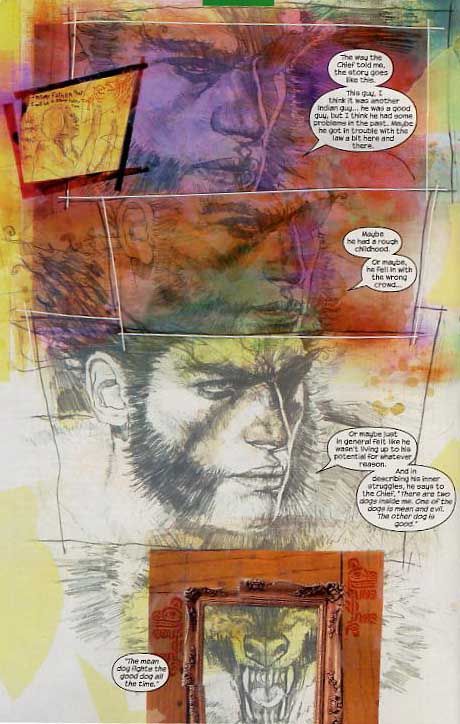 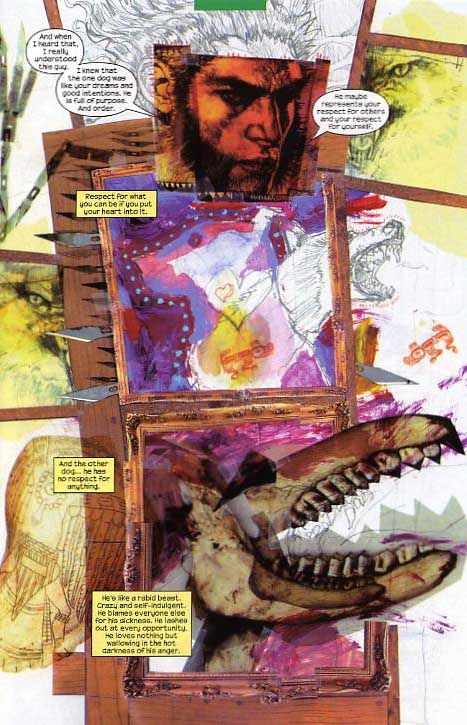 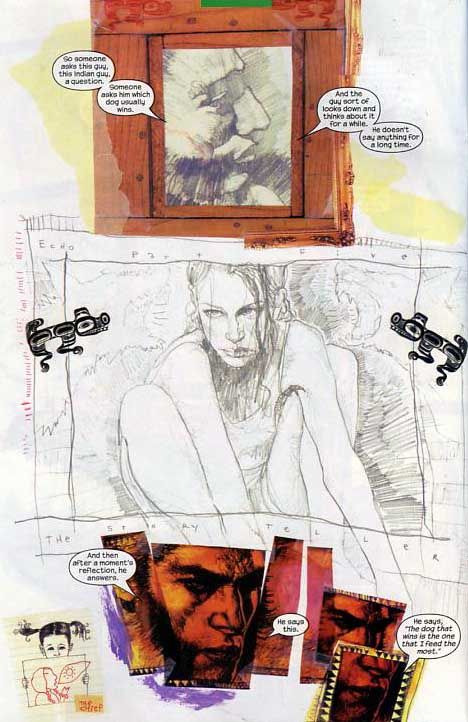 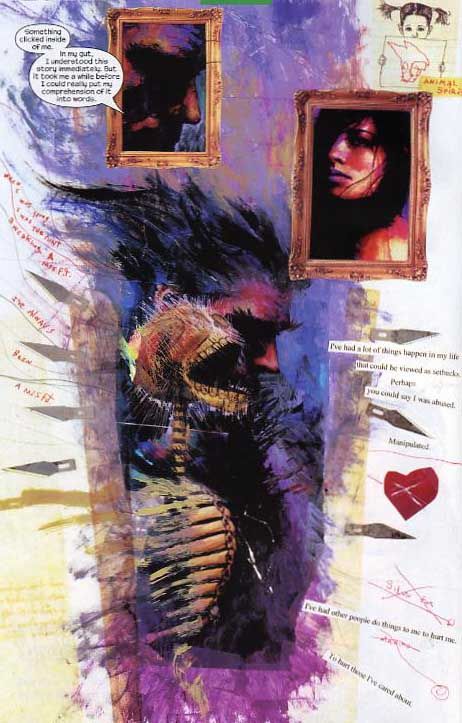 Echo decides what to do with her life as this digressive arc comes to a close.

Review: I thought I’d do this differently, and do an overview of the entire arc, and not mention the art first.

Let’s face it - Bendis needed a break. How many books is he currently writing? Let’s see: Ultimate Spider-Man, Ultimate X-Men, Ultimate Six, Ultimate Fantastic Four, Secret War, The Pulse, Powers …. am I forgetting one? I swear I am. All of this on top of Daredevil. I would have had a cranial meltdown before all of that, and certainly the quality would have suffered, but Bendis must be inhuman, because the general consensus is all these books (well, that are currently out) are good, oftentimes great. I know I couldn’t imagine anyone else writing Daredevil.

But Bendis’s good friend David Mack stepped in to give him a little breathing room and take an arc. Mack is an incredible writer in his own right - anyone remember Kabuki? (Image is coming out with a new Kabuki series soon, The Alchemy, and in spite of this arc, I recommend you check that out.) They could hardly put the Daredevil book on hiatus, but then again, no one could really use the character, at least not in a big, present day way - after all, Bendis left us with Matt at the cusp of a major alteration in his life: becoming the “king” of Hell’s Kitchen, to keep any gangsters from attempting to fill the power vacuum left by the now incarcerated Kingpin. But Mack had a character in reserve, one who had made an impact in Matt’s life - Echo (see the trade paperback Parts of a Hole for that particular relationship).

The first issue of his guest arc was dazzling. It was rich in character introspection and the art was mind blowing. It was certainly the most unique book on the market, and an artistic triumph. Then … well, let’s face it - you had to be an Echo fan to hang in for the rest of the arc. There was probably two issues (two and a half, perhaps) worth of story, stretched into five issues. He’s a very good writer - it was all well written - but by necessity of stretching a somewhat thin story, repetitive and often dull. At least it ends here, and I hope no one thinks bad of Mack because of it. He really is very good, especially when he has the time to work on his story.

For those who wonder what occurs in this issue, please consult the blurb above. That’s all that actually happens in this issue. Mack does action very well, and this arc suffered for the lack of it.

Well, I promised I wouldn’t mention the art first, but I can’t neglect it entirely, as it is the main draw of the issue. Some people don’t care for his collage style, feeling it’s too busy, but I love the way that the art always seems to be on the move. Private thoughts appear as jottings on the side of the page, and you get a sense of interacting with the art as opposed to just staring at the pretty pictures. His depiction of Wolverine as a human skeleton outlined with X-acto knife blades, joined by warring tribal animals trapped inside his torso, is a beautiful and empathetic bit of symbolism - in fact, I would love to see if this take on the character continues when he takes over writing chores of Ultimate X-Men . (He’d be an interesting choice to take over Wolverine when Rucka leaves as well.) But Mack loves Echo, which shows in his artwork of her. Her panels are lush and often photo-realistic.

To sum up, a gorgeous book to look at, but somewhat tedious to read, unless you’re a real Echo fan. I know Mack will do better in the future. (And roll on January - I can’t wait to see where Bendis and Maleev take Daredevil next.)

Echo reaches some closure in her life.

Writer and artist David Mack ends his fill-in arc on Daredevil with the tale of two fighting dogs, told by Wolverine. With this last issue, Mack creates a nice finishing touch.

The story tells of two dogs, one good and the other evil. Wolverine interprets the good dog as respect and the potential to create good. The other dog is a creature of self-loathing and blames others for its pain. A poignant and brilliant part of the story is when the Indian is asked which dog usually wins. The Indian says, “The dog that wins is the one that I feed the most.” As one can imagine, Wolverine relates to this story well and it has helped him in life. Moreover, Mack reiterates the idea that stories “echo” to other people and can affect others positively. As a child, Maya (Lopez, a.k.a. Echo) heard this story from the originator, her father. Until now, she did not understand it. Consequently, Wolverine’s telling of the story helped Maya.

Mack creates a few more smart comparisons again with this last issue. For example, Wolverine describes his former self as “a cage of razor blades.” Wolverine also magnificently states, “The part of you that thrives is the part that you fee the most. Some people never understand that. They live their whole lives putting the blame on something.” The intelligent dialogue of Wolverine can be applied to our actual lives under Mack’s pen.

Finally, Maya realized that her purpose is to tell stories. She now performs stories in sign language, dance, and music at a theatre in New York City.

The singular vision of Mack is extremely well done throughout the arc. The story and art work together at all times and even make it hard to differentiate between the two. Mack coarsely sketches a unique version of Wolverine in the first few pages. The beginning carries an enjoyable skeletal theme with a giant gaping dog jaw (page 2) and the razor blades. The layout of page 3 is pleasing because of its colors against white, Maya sketched attentively and exhausted, and the two Indian dog figures accenting the frame. Also, the presence of the Indian dog figures throughout the issue adds a certain nice feel, especially within the razor blade skeleton. Mack adds Daredevil, Elektra, and the Punisher into the art nicely too. Page 24 is particularly amazing in that Maya describes her hallucination and the art views Wolverine blurring into some kind of wolf-bird creature. The heat within the tipi is illustrated well too.

This issue is seemingly flawless as it is probably the best issue of the arc, seeing the most progression. As an arc though, it could be compressed quite a bit into a better read as only three of the five issues see progression. The decompressed feel of the arc makes it repetitive and trite.

In the conclusion, Mack unexpectedly satisfies with Daredevil #55. I recommend ‘Echo’ and pick up the eventual trade-paperback.