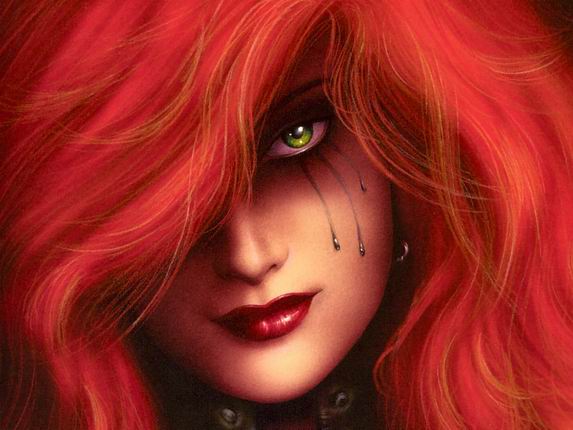 Joseph Michael Linsner first introduced Dawn on the cover of Cry for Dawn #1. The comic, which he started when he was twenty, was a contemporary version of a horror comic. Its stories often addressed fear in the sexual realm. Dawn, a distinctly made-up, provocatively-dressed redheaded woman, acted as the comic's host, but Linsner always knew he would write stories about her.

The first issue of Dawn appeared in June of 1995; for a short time, the title outsold Batman and Superman. The first issues told the story eventually collected as Lucifer's Halo. It's Linsner's first and perhaps most famous Dawn story, but not necessarily his best. Taken together, however, Lucifer's Halo and Return of the Goddess can be read as attempts to address life's quest as young men and young women experience it. He dedicates the stories, respectively, to his mother and his father.

Not surprisingly, Linsner chose to address his own gender first.

Lucifer's Halo begins with Dawn, the Goddess, who desires to learn of heaven and hell, of joy and sorrow. She does not know these things; "nature is beyond them." Dawn and the Horned God, the Lord of Death, have an encounter, and we're led to our story.

The protagonist, Darrian Ashoka appears to be an incarnation of the Horned God, but also everyman, and the author himself. He lives in a New York of Linsner's mind, a place where armoured warriors with traditional weapons hold a weekly melee in Times Square, with the survivors keeping whatever they find on the bodies of the dead. Darrian and his room-mate, Jayniss Goldbaum participate, but Darrian is beginning to have second thoughts. On the particular Saturday of this story, he sees Dawn. Armed only with his father's sword, he follows her. They have a brief tryst and he leaves on a complicated quest that involves a strange cathedral, God and Satan (presented here as nearly-identical men involved in a sexualized relationship. They also resemble more than a little Darrian himself), warring angels, twisted demons, frequent costume changes, and the titular halo. After many battles and enigmatic encounters with Dawn, Darrian comes to terms with his father's death, sets his own path, and leaves on a ship bound for Europa, which he calls "the land of my fathers."

We have some kind of quest for identity, but the specific meaning of events is less than clear. The symbolism suggests a writer in his twenties; it's both overt and obscure. That is, the fact that the story is highly symbolic is overt; the symbolism itself can be obscure and idiosyncratic at times. Linsner uses the kind of personal mythology often found in the writings of teenage mystics, the diaries of coffeehouse poets, and the songs of 70s supergroups. It can be effective; just as often, it proves ponderous and excessive. It has obvious roots, however, in neopagan and Christian iconography, and these provide frames of reference that help with interpretation. Linsner also addresses the confusion with lengthy expository dialogues. These clarify specific points, but they also interrupt the flow of the story. Linsner has thought about the issues his story addresses, but I'm not certain that any clear philosophy or mythology can be found here.

Adding to the frustration are editing errors made in the original comics and left uncorrected in the graphic novel--at last, I assume the misplaced apostrophes and it/it's errors were not intentional parts of Linsner's symbolism.

Whatever one makes of the story, the artwork sold and continues to sell Dawn. Joseph Linsner, a self-taught artist, ranks among the best in the comic-book industry. Dawn features lush, detailed depictions of humans, idealized and grotesque, who play among a surreal landscape grounded in familiar reality. Darrian battles silvery angels and fetus-like demons on New York streets at dusk; Dawn the Goddess perches atop a mailbox by a No Parking sign. Lucifer's halo gets smuggled in the sleeve of Sinatra's Come Fly With Me. Yes, Alex Ross is technically a better artist, but Linsner has an original vision, and lighter touches soften the story's self-seriousness.

The visual Dawn brought Linsner many of his fans, and his depictions of the character, part goddess and part cheesecake, may raise some questions. Linsner would likely ridicule the dichotomy since, historically, many depictions of women have been both sacred and prurient. Any representation of an idealized adult female, however religiously-charged, could touch, at some level, the desires of someone sexually attracted to women. And even the most blatantly pornographic kitsch could be interpreted as exposing the divine aspects of human sexuality, if one holds such views of sex.

A more accessible tale, also heavily rooted in mythology and neo-paganism but more accessible, ran in the next issues. It appeared, with modifications, as Dawn: The Return of the Goddess.

Go to the official JML site at Linsner.com!!!
back

back
All images are used as tribute to JML
2007, all rights reserved.