WHO IS MERIEM AKA CAVEWOMAN 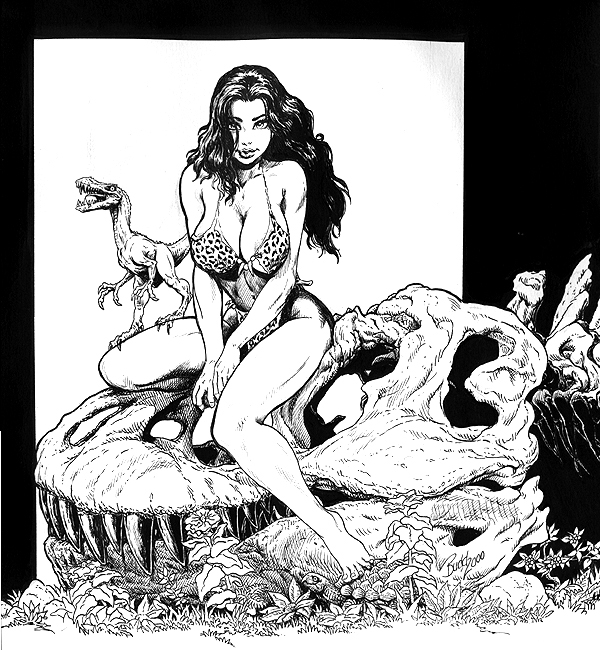 Well...Meriem is her name...Meriem Cecilbie Cooper. But if you call her Cecil she will slash you :-)
When her father died her mum rebelled against life at the expense of Meriem.
In an effort to rescue Meriem, her granddad took Meriem away from her mum and planned to take her to the future (where gramps had been twice already). Unfortunately...the government found out about gramp's timetravelling capabilities and messed things up in a way that brought them both not 70 million years into the future but to 70 million years in the past instead.

In order to make Meriem timetravelling equiped Gramp redid Meriem's moleculair structure and made it more dense. This makes Meriem even stronger then you average 12 ft Cavebear and really tough and nearly indestructible.
Gramp did that sorta thing before to a gorilla, called Klyde, who now is as tall as a building as a result also...but that wasn't supposed to be like that according to Gramp.

Stranded in the past they made a home for their own but then Gramp was killed by a T-rex. Meriem went through hell but eventually her lifeforce seemed strong enough to survive this tragedy. She went out to kill Gramp's killer and after the revenge she discovered a nest. In it were the two children of the T-rex. She adopted them and eventually one of them is now called Harmony.

Meriem, Klyde and Harmony make a strange family but it is the only family she has left.

That is...until one day her hometown Marshville is also somehow transported through time and shows up in Meriem's 'monster infested back yard'...
Meriem is very happy to be amongst 'her' people again and even finds a moment to fall deeply in love with Bruce, a nice guy who does respond to Meriem's affection with much the same enthusiasm.

But when the rains came and the prehistoric world rejected Marshville and they had to leave the town. Somehow Meriem developed a psychic bond with the 'her' beasties and they all moved...after a hazardous trip through the jungle via rail and eventually a river filled with monsters who eventually sank the ark (a huge train aka boat) they were in, they reached the Pangean Sea where they set up camp on the beach and created a new place to live called "Marshville Beach".