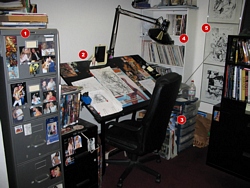 In the opposite corner from Rick Basaldua, you'll find Rick's brother and penciling madman Eric Basaldua! Eric's best known for his work on The Magdalena, but has most recently done some issues of Hunter-Killer and is currently hard at work on an issue of The Darkness before moving on to a top-secret project.