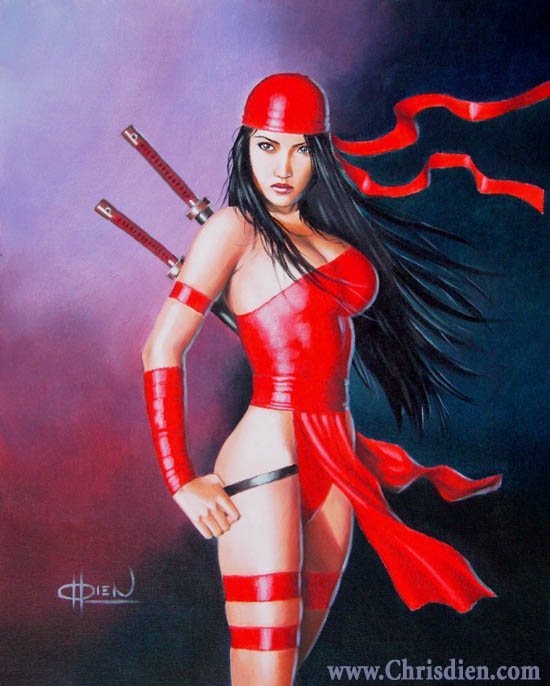 Powers-- Originally, Elektra relied only on her prodigious fighting ability, reflexes, and endurance, often fighting with two sai, three-pronged daggers. Since returning from the grave, Elektra has exhibited a sixth sense which allows her to track down others, as seen when she followed Wolverine during the time he was victim to his animalistic side.

History-- Elektra Natchios is the daughter of a Greek ambassador to the United States. Although the details of her early life remain unclear, it has been suggested that her older brother Orestes somehow had their mother killed, which forced Elektra into an unhealthy dependency on her father. During her college years, Elektra studied political science at Columbia University in New York, where she met the young Matt Murdock. Murdock and Elektra fell in love, and Murdock revealed to her his superhuman sensory abilities. Later, Elektra and her father were held hostage by terrorists, and Elektra (who studied martial arts since childhood) helped a masked Murdock defeat their opponents. Unfortunately, a policeman shot Elektra's father, thinking him one of the terrorists. Distraught, and with her faith in law and order shattered, Elektra left her school, Murdock, and the United States.

She soon found herself studying martial arts in Japan, and she later left to join the cult known as the Chaste, an exclusive, worldwide secret organization of martial artists, led by Stick. (Stick would also later train Murdock who would become the hero Daredevil.) Eventually, Stick had Elektra leave the group, claiming that her grief over her father's death would continually hold her back from her full potential. Elektra later infiltrated the Japanese assassin guild known as the Hand (hoping to gain favor from Stick by eventually subverting the evil Hand and bringing their secrets to the Chaste.) Serving the Hand, they bade her kill one of her former sensei and soon corrupted her. Eventually, however, Elektra fled the Hand after their leader demanded sexual favors from her.

Elektra became a bounty hunter and assassin. On one particular assignment, she encountered Daredevil, learning his true identity. Although neither could accept the other's choice of occupation, they still loved each other. Soon after, Elektra was hired by the crime lord Kingpin, becoming his chief assassin. She was to kill Daredevil's friend, Foggy Nelson, but could not bring herself to when Foggy recognized her as "Matt's girl." Elektra was killed by Bullseye, who was trying to prove himself and take the Kingpin's favor from her. Elektra managed to survive long enough to make it back to Daredevil but died in his arms.

The Hand later attempted to resurrect Elektra using ancient ninja magic. They were opposed by Daredevil, his partner the Black Widow, and Stone, a member of Stick's organization. With the Hand defeated, Daredevil then tried the process himself, but believed he had failed. In fact, he successfully revived Elektra, with his love apparently purifying her spirit. Nevertheless, Stone took Elektra away, unbeknownst to Daredevil, in order that she could live with the Chaste.

Elektra stayed at the Chaste's retreat until the Hand attacked her again. Elektra fled to confront the Hand, who wanted to fuse the "killer" piece of her soul with their warrior Erynys. Although she defeated the Hand, Elektra was reintroduced to her "evil" side. She moved back to New York City, meeting Daredevil again but refraining from resuming their relationship. At one point, she had apparently reconciled with Stick, as both of them were on hand to guide Wolverine through a spiritual and physical healing process soon after the loss of his adamantium-laced skeleton.

Continuing her career as a freelance assassin, Elektra began a series of confrontations with the Snakeroot, an offshoot of the Hand (and those responsible for creating Erynys). The Snakeroot hoped to re-energize a ceremonial sword with the blood of innocents, but Elektra recruited a group of martial artists to help her defeat them. Although the martial artists were killed, Elektra ultimately defeated the Snakeroot.

Elektra continues her career as a mercenary. 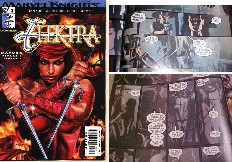 Adapted from the Gamers' Handbook to the Marvel Universe, Manwithoutfear.com, and Electra: the Resurrection
Last update: 12/15/01